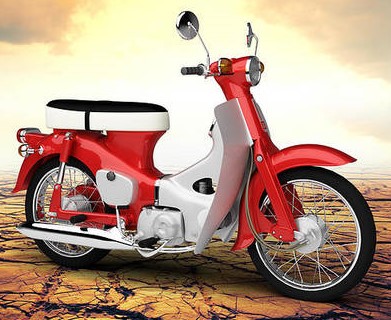 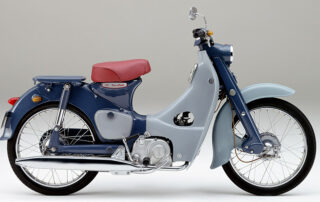 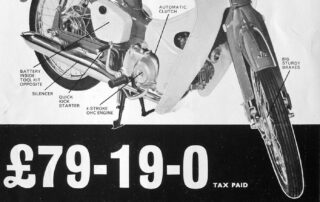 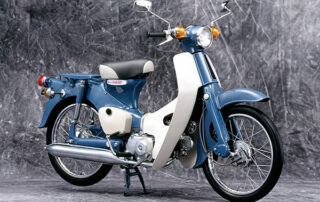 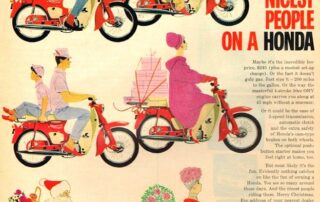 We've all had a Honda Cub haven’t we? Well if not, now's the time to get one, bags of fun and super cool!

In 1963 Honda’s marketing slogan for the Cub was, “You meet the nicest people on a Honda”. If you buy one, will you?

Full disclosure before we go on. We do love anything mechanical and old, but the Honda C series has a special place in our hearts. Our earliest memories of the Honda are ragging one about off-road, having chopped the frame, turned the exhaust pipe into a sawn-off shotgun and replacing the long-abandoned air filter with a pair our mum’s tights over the end of the carb! Happy days, nostalgia ain’t what it used to be, is it.

The genesis of the Honda Cub line began in 1958. Honda had only been going for a decade and the first classic Honda Cub was little more than a beefed up bicycle with a little 49cc lawn mower engine strapped on. So, we’ll skip the boring bit and jump to the interesting stuff.

Honda must have sensed they were on to a good thing because in the early 60’s they upped their game with the Cub line and launched the models we’d all recognise today. In doing so they probably didn’t realise the Cub was going to grow into a Tiger. Honda needed to keep up. They did. Throughout the 60s Honda made modifications to the original launch model. The marvellously simple chain driven single overhead cam engine remained largely unchanged apart from updates such as 12v electrics from 6v and electronic ignition to dispense with those pesky points. Items such as forks, handle bars, switch gear all got revamped during the Cub’s lifetime.

Styling mods came thick and fast. Headlamps, clocks, colour schemes, different shaped plastic mudguards all kept the Cub up to date and relevant to its millions of fans. By 2017 sales had reached 100m!

Owning and riding one today is as much fun as it was forty years ago.

The modest steel frame design gives an inexact ride. The suspension a has laid back approach to road irregularities almost as if it cannot be bothered! Some have compared the frame and the suspension combination to a pogo stick on wheels. That is a bit harsh. Funny all the same though. The elementary braking system needs persuading to work with a committed effort on both brake levers, but once the brake shoes get closely related to the drums, they can catch you out and bring the little pint-sized Honda to a man-size full stop double quick. Moving from the stationary position you’ve now reached can be great fun. Hold the throttle open, grip the back brake and stamp it into gear and wheelie like a Moto GP bike!

Overall, aside from very irresponsible, juvenile wheelies stunts which we’d never condone, once you adapt your riding style to the idiosyncrasies of the whole package, you’ll find yourself grinning and then spontaneously chuckling out loud as you buzz along! We guarantee it.

All the engines in the range, the C50, 70 & 90, bullet proof. They’ll all return you in well in excess of 100mpg. The C90 with its 8bhp engine has the most grunt. Once it’s moving it does sound like it is about to explode with a Chernobyl like intensity. Don’t worry, it won’t. Just keep thrashing it. Getting to it’s top speed of 55mph takes a while (it would be quicker if you chucked it off a cliff) but once it’s there, you’ll be buzzing, literally, buzzing! Sauntering along would be our preferred style.

Because of Honda’s legendary build quality, the little Cubs go on and on and on. Yes people will tell you to check the rear mud guard as it’s a structural point and the timing chain and ….yawn. Don’t worry, you’ll be alright. And if by fluke it does go wrong, you can fix it with a biro and some sellotape.

Is a classic Honda Cub the greatest motorcycle in the world? Okay, that might be stretching it a little. Certainly, one of the most successful, rugged and fun. A hundred million people can't all be wrong, can they? Everywhere you go, either to the shops, the pub, the petrol station, people will stop you and chat regaling you with their memories of having one or one in the family. They’ll get a bit misty eyed too, ‘cos the little Honda Cub evokes those feelings in all of us. If you didn’t get one first time around give yourself a massive treat and get one now. The Honda Cub is a true classic.