The Festival of the Unexceptional 2021 Review

Car shows in general do put a smile on your face without you realising but the Festival of the Unexceptional was different, I was beaming uncontrollably and at first I wasn’t sure why.

Was it because everyone was just so happy to be there, delighted to be showing off their prized possessions, polishing crappy paint jobs within an inch of their life. Nope.

Was it because the event was awash with shiny people from the tellybox, influencers and familiar faces that we usually only see in 2D. Nope.

Okay, it must have been the stories that spilled from the enthusiasts, eyes alight and smiles wide as they took you on a journey of their ownership. Nope, although delightful and very endearing, that wasn’t it either………

​It was the sea of mundane metal! The bland cars that history had tried to forget! 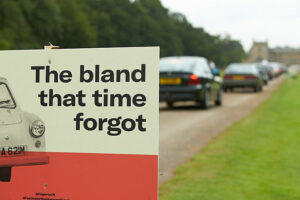 Individually the Triumph Acclaim probably wouldn’t turn your head, but teamed up with row upon row of Nissans, Renaults, Rovers, Citroens, Volvos and other equally crap cars, they came into their own and they shone!! Gathered together, all of them as unexceptional as each other, no supercars to steal the limelight. Every one of them basking in the glory of being photographed by the shiny people, posing for their debut on social media, ready to hit the headlines of some glossy magazine. Fabulous.

​I reckon being unexceptional is great, no pressure, no expectations. Being bland is okay, being ordinary is cool, because someone somewhere will love you for it.

​If you only get to one event next year make sure it’s the Festival of the Unexceptional – it’s good for the soul and does exactly what it says on the tin.