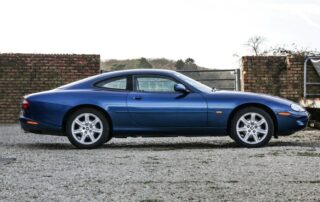 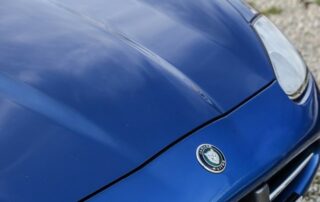 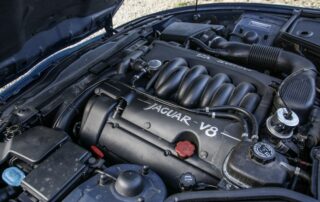 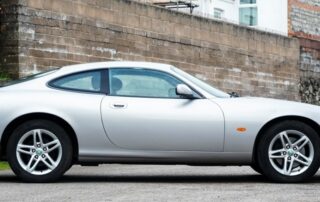 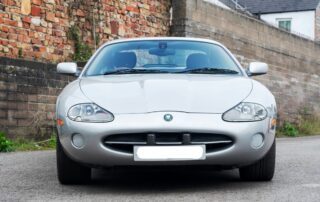 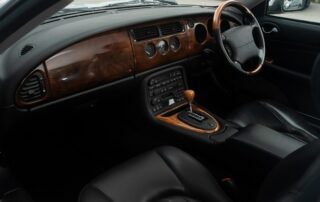 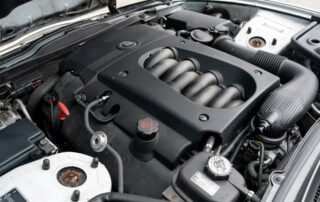 The Jaguar XK8 / XKR is performance, panache, and presence all in a superb British classic sports car capable of 155mph. Is there any reason why you wouldn’t want one?

The Jaguar XK8 was the successor to the XJS, not a massively hard act to follow, but its spiritual home is the E-type. It’s not hard to see why. Just to prove a point Jaguar launched the XK8 at the Geneva Motor Show exactly 35 years after launching the Jaguar E-type.

In the 1990’s Jaguar found themselves at a crossroads. Resources had been tight for a while and a recent takeover by Ford was unlikely to make things easier.

The Jaguar Team knew they couldn’t stand still. In the early 90’s a team began working on a new sports car project. It had one of those funky secret code names, but who cares! Both cost and time were project critical. To save both, the team retained and modified the floorplan from the XJS. They borrowed an existing rear suspension set-up from the saloon Jag, but added all new double wishbone suspension at the front end. Best of all a 32-valve quad cam V8 engine pushing out 290bhp was popped under the bonnet. Just what the Jaguar needed. The first V8 in a Jaguar since the 250 – which didn’t count ‘cos the classic 250 was a Daimler back when Daimlers were Daimlers.

After launching in Geneva to rapturous Press reviews, Jaguar didn’t hang about. Just two short years later Jaguar decided to up the ante and in 1998 introduced the Jaguar XK-R. The V8 quad cam in the classic XK-R had a supercharger bolted on, giving the XK-R a thundering 370bhp. The XK-R in standard restricted form was good for 155mph. In (easily) unrestricted form allegedly the beast is good for 175mph.

As expected, the Jaguar XK8 came with a number of trims, toys and style variations, but nothing much changed in the physical design of the classic XK8 during its decade long production run. Somehow Jaguar must have had a ‘Eureka’ moment building the XK8 though. It was plainly built to a much higher quality standard than previous models. Under the new Ford management, Jaguar suddenly understood it was cheaper and quicker to build the XK8 correctly, to the milli­metre and not spend precious time at the end of the line or worse when the car reached the dealers sporting panel gaps and leaks and goodness knows what.

There were a couple of notable, ahem, issues however with the early XK8’s, but in fairness we’re not pinning that on Jaguar. Jaguar used a technique for the engine liners that a involved new process. It was called Nikasil. The technical is incredibly boring so we won’t bore you with the details. But the upshot is, when the new material came into contact with low sulphur fuel typically widespread in the UK, the concentrated sulphuric acid produced caused by combustion of the fuel resulted in mayhem inside the engines. This only applied to pre-2000 built models, and by now even the earlier models which may have had the problem have almost certainly been fixed under warranty.

The second ‘issue’ was the timing chain, or to be specific the plastic timing chain tensioners. Put simply, on the early models they fell apart, causing the chain to flap about, then the pistons going up met some of 32 valves going down and …well, not great. That’s why it’s called a timing chain, to keep everything in time.

If you’re pondering buying a classic Jaguar XK8, we wouldn’t let this be a massive worry. Jaguar replaced the plastic bits with proper metal bits and again, most early cars will have been sorted by now. Or the engines have exploded and you buy a non runner. Joking, just joking.

The key take-away; just be aware. Call us if you want to chat or use the Forum and ask the experts, who will do their best to scare you senseless! Joking again! We’ll messing about now and get to good bit.

The Jaguar XK8 goes as good as it looks. From zero to stupidly quick takes the blink of a big cats eye. Be warned. But better than that, the XK8 has that special quality that only classic Jags seem to be able to pull off. It can be taut, fast and sporty. Or, if you’re not in a tearing about mood, it can transport you many miles in luxurious comfort wherever you’d like to go and pop you out at the other end as if you’ve been to the local shop to buy a newspaper. It really is that good. In convertible form, with the top down it delivers a sense of occasion that only a classic Jag can.

The build quality of the Jaguar XK8 is more Germanic than British and is shows. Stand the classic XK8 side by side with other classic Jaguars and you have to check the badge to see if they are from the same manufacturer. The engine issues, are not to be dismissed. If a big complicated V8 goes wrong it can leave a sour after-taste. But do take the horror stories with a dollop of salt. Most now will have been rectified and if you’re not sure, just give us a shout.

We said at the top these are amazing value, because the they. Where else can you buy a true British classic sports car with impeccable build quality and outstanding style capable of being used every day for between £5,000-10,000? Nowhere is the answer. Incredible value. We doubt they’ll stay that way for long.